Area residents overwhelmingly support the modernization of the 60-year-old I-94 East-West Corridor with an added lane in each direction to reduce congestion and improve traffic flow and safety, according to a poll of Milwaukee and Waukesha voters released today. 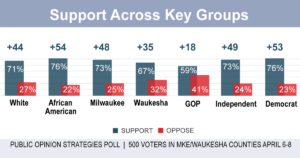 Roughly three-quarters of those surveyed drive this vital stretch of Interstate between the Marquette and Zoo interchanges at least once a month, with 28 percent using it weekly. People who live along the   3.5-mile proposed project work area are most likely to use the corridor daily.

“The poll shows that people understand this section of the Interstate is old and reaching the end of its life,” said Terry McGowan, president/business manager of the International Union of Operating Engineers, Local 139 and member of the I-94 East-West Econ Connect coalition. “Doing nothing is not an option. Instead of a continual cycle of short-term fixes, like another resurfacing, which will lead to years of orange barrels and traffic diversions with no improvements in safety or increase in capacity, we need to move forward now to create jobs and rebuild the corridor to meet the region’s demands for the next 50-plus years.”

According to the poll, 71 percent of whites and 76 percent of African Americans say they support the reconstruction of the corridor with an additional lane in each direction. Overall, 73 percent of those surveyed in Milwaukee County and 67 percent in Waukesha County support this option.

While 71 percent support modernizing the corridor with four lanes in each direction, only 42 percent support a less expensive plan that does not include an additional lane and all the traffic flow and safety benefits related to the increased capacity and reduced congestion. A 56-percent majority opposes the lower cost option.

Reconstruction of the corridor, including modernization and additional capacity, is projected to cost about $1 billion. The project is expected to be paid for with federal-aid highway funds and bonding – funding sources that cannot be transferred to local transportation projects or services. Project engineers estimate the cost of the additional lane at 10-15 percent of the project’s price tag, with the remaining amount related to pavement and bridge replacement and design and safety improvements.

“We have a once-in-a-generation opportunity to rebuild this corridor, but It shouldn’t be an either/or proposition,” explained Tracy Johnson, president and CEO for the Commercial Association of REALTORS® Wisconsin and another coalition member. “We know a well-functioning corridor and public transit are integral to increasing safety, reducing congestion, and promoting economic development in the region.”

Public Opinion Strategies conducted the poll of 500 voters in Milwaukee and Waukesha Counties from April 6-8. The survey was weighted to reflect the area’s demographic, geographic, and political makeup and has a margin of error of +/- 4.38 percent.